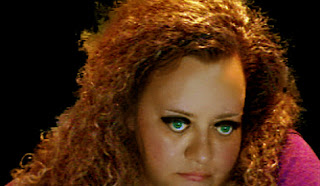 Many (if not most) of you know I've been dealing with a lot of issues. My physical health has been touch and go for several years now and, to be blunt, has worsened. I was finally able to get Obamacare (and thereby my $1000 a month pharmaceutical needs covered) only to have congress pass a tax bill into law that will likely cause me to lose coverage by October. That said, Glaxo-Smith-Kline has been great about providing me with my most expensive (and unfortunately most necessary) lung medicine free of charge. The not-so-great part is I'm only guaranteed free Anoro Ellipta until September 2018... literally 1 month before I will likely lose my health coverage altogether. To say I'm stressed is a major understatement.

At any rate, and to answer the question I receive most often, YES... I am still writing. I've been working on 3 different books as my health allows and hope to have them done ASAP. I will finish the Trek serial and Viking series if they are literally the last pieces I ever publish. Please understand that part of my illness causes memory lapse and cognitive delays (I have several lesions in my brain) so writing hasn't been an everyday ability of mine. Regardless, I am doing everything within my power to keep my promise and finish, at minimum, the Trek serial and Viking series.

Call your senators TODAY as soon as you wake up—the Republicans are expected to pass Trump/Ryan-care as early as today. Democratic senators don't even know what's in the bill, much less us, the American public.

A video worth watching:

This morning's headline in Berlin 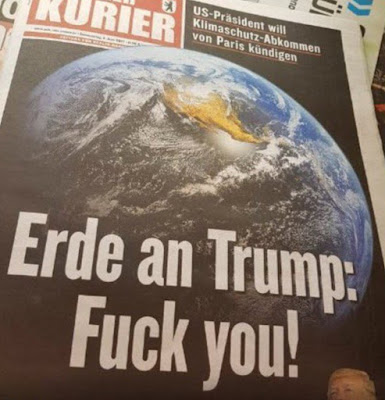 Paul Ryan Is A Monster 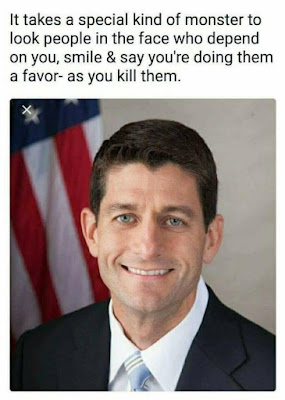 Never in my life—literally not even once—have I wished for another human being to suffer. I've always been one of those "bleeding heart commie libtards" who couldn't bring herself to wish ill will on anyone—including people who've stabbed me in the back, told lies about me, physically and/or mentally harmed me, etc.

But that was the old me.

The new me—the alternate reality version of my former self who came into being on election night—isn't a woman I recognize. Given the times we now live in, I suppose on a purely scientific level the metamorphosis I went through was inevitable. (Never forget Newton's third law: for every action there is an equal and opposite reaction.)

Whether an unavoidable consequence or not, I don't like this newer, icier version of my former self. The pre-election me was incapable of feeling genuine hatred toward another person... much less a burning desire to watch a man suffer. But then the old me was so unfamiliar with Paul Ryan that I couldn't have picked him out of a 2-man lineup. 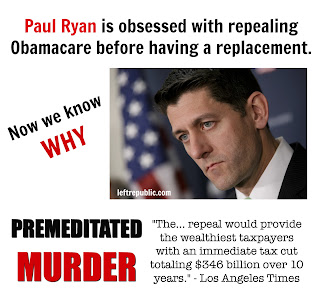 Apparently I became too politically complacent under President Obama's leadership for the simple fact that I knew he was trustworthy, honorable, and genuinely cared about all Americans. I didn't live in a constant state of anxiety, fear, rage, hopelessness, and an unquenchable thirst for vengeance because I understood that our (then) president had the best interest of the country at the forefront of his mind at all times. That knowledge allowed me the freedom to focus on the political issues that meant the most to me—poor women and children, prisoners' rights, etc.—and pretty much block everything else out.

In keeping with Newton's third law of motion, the yin afforded me under Obama came at the price of an insidious yang: I didn't know who this monster named Paul Ryan was pre-election season; now I have to watch every day as this traitorous piece of shit enables Trump, whitewashes treason, presents genocide with a smile and the promise/lie his healthcare reform won't hurt Americans, and does everything he can to undermine and exterminate the 99.9%. 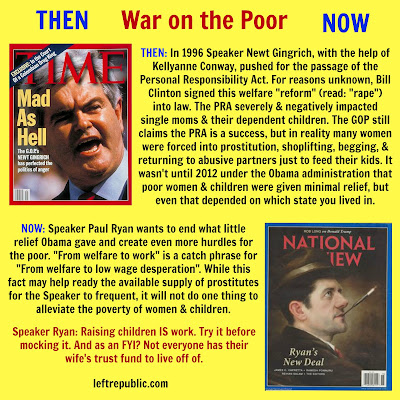 Republicans like Paul Ryan believe that wealthy people deserve to pay a lower percentage in taxes than the rest of us because they have contributed more to America than we have. WE are the ones who work the shitty, non-living-wage jobs those billionaires "contribute" to the USA. WE are the ones who are taxed out the ass so those same billionaires can be bailed out with OUR money when they make ill-founded business decisions. So what great contribution are the 1% of the 1% making to America?

In a word, nothing.

We already learned from the Reagan years that Trickle Down Economics doesn't work. When you allow billionaires and mega-millionaires to pay lower taxes they do not turn around and reinvest that money into paying workers living wages, creating more jobs, or doing anything of benefit for anyone but themselves. Instead, they hoard. Now, because of Ryan and the GOP, the little bit that Obama forced the ultra-wealthy to do—namely to fund Obamacare—soon won't be contributed either.

I won't pretend to be an historian, but isn't this entire let them eat cake attitude how revolutionary wars begin? It was certainly the cause of Louis XVI and Marie Antoinette literally losing their heads. It was also the catalyst to the Russian Bolshevik Revolution that led to the formation of the former (communist) Soviet Union. Let them eat cake was why Batista was overthrown by Castro in Cuba, which also resulted in communism.

Paul Ryan, the white trash piece of shit from Nowheresville USA, obviously understands less about history's examples than I do. Either that or the Speaker of the House is a science denier like most Republicans and believes himself above Newton's third law. I honestly think Ryan is a disgusting premeditated mass murderer who believes Americans will keep falling for the GOP's propaganda and "divide and conquer" tactics despite growing evidence to the contrary.

Unfortunately, I no longer believe this country's elections aren't rigged. And that means Paul Ryan and others like him aren't going anywhere unless forcibly, physically removed. I fully and freely admit I yearn for the day it happens—and it will happen. No country, no person, no anything is above scientific law. In the meantime, I await karma's visit to the Speaker of the House. May he and the people he loves most find themselves being treated no better or worse than Ryan has chosen to treat the 99.9%. If it's acceptable for even one child in this country to not receive preventive or emergency medical care, food, and shelter, then it's acceptable for the Ryan family too.

Paul Ryan has lived off of taxes since he was a teenager. He didn't become wealthy because he was smarter or worked harder than the janitor at the local school. On the contrary, Paul Ryan found wealth the old fashioned way—he fucked his way into marrying it.
Posted by Tina at 2:24 AM 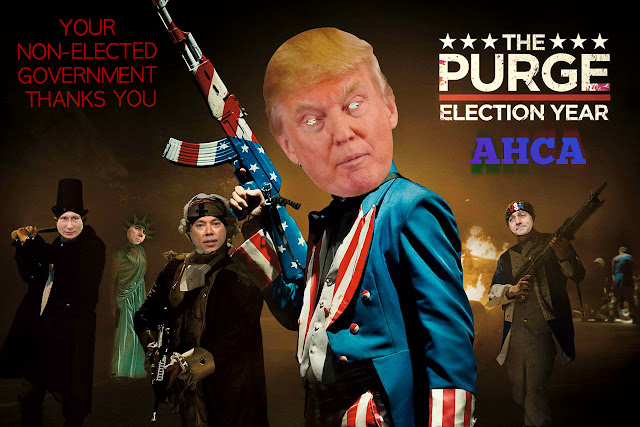 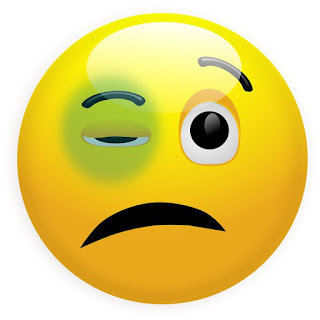 I'm going through some medical issues right now. The worst symptom I'm dealing with is chronic pain—and when I say pain I mean paaaaaain—so I've more or less been unreachable the past few weeks. I'm trying really hard to get better.

Anyways, I wanted to reassure everyone I am still writing. It's not going as fast as I'd like it to because I have to lie down a lot, but it's going regardless 😊 I apologize for being off the grid so to speak and should be checking social media and emails within another week or so.

More updates as I have them to give coming your way soon...

The Yuge Wall of Jina: It's Fully Loaded 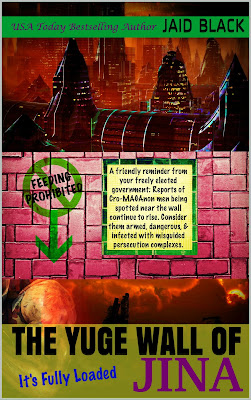 The sequel to The Yuge Wall of Jina: It's Bigly picks up a few days later, during the farce of a congressional hearing Snow, Hillary, and Warren are subjected to. (FYI: I got really sick for a while so I'm running about 3 weeks behind schedule!)

When it becomes obvious to our three heroines that the hand-wringing pussies known as the Democrats Normal American Party aren't going to be any help whatsoever, the women take it upon themselves to escape Trumpgolia.

Although originally expected to release this month, TYWOJ:IFL will definitely release in May.
Posted by Tina at 9:59 AM

Here We Go Again (A Rant) 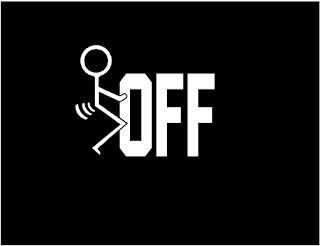 All the old gossip and lies about me are apparently cropping up again. I say apparently because I absolutely refuse to go look at precisely what's being said. However, due to some hate mail I've received wherein I've been accused AGAIN of being everything but a human being, it's safe to conclude the rumors are recycling—if indeed they ever stopped. (Don't know and will not look!)

So here's what it boils down to: I released a lengthy statement about the situation back in October of 2016. Aside from EC having closed down on 1/1/17, literally nothing has changed. There are no updates to give because I don't have fuck all to do with those attention-seeking authors. I have moved on in life; maybe one day they will rid themselves of their bizarre obsession with me and do the same 💣💥💫

Email ThisBlogThis!Share to TwitterShare to FacebookShare to Pinterest
Labels: personal

The Yuge Wall of Jina: It's Bigly (And Releases March 28th!) 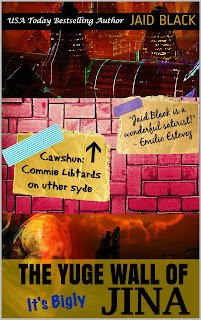 The first book in The Face Palm Chronicles is up for pre-order (woot!) You can click here to view and/or buy it at Amazon. FYI: This was listed as $4.49 online, but it will actually be $2.99 upon release. (I'm a stickler when it comes to the pricing being justified by the word count as I'm neither a fan of overvaluing nor devaluing my work!!) At any rate, if you pre-ordered it at a higher price, Amazon doesn't charge you until release day anyway so you'll still only be charged $2.99.

First of all, expect to belly laugh from start to finish 😉 This series spoofs the political idiocy that is our current reality in the USA, while offering unmistakable commentary on where I see the divisive path we're on leading to. I don't hit you over the head with it because my ultimate goal is to give you a cathartic laugh. I guess you could say I keep my message in the subtleties (i.e. the book is set in a future where the USA doesn't exist) and leave it at that.

Why I'm Writing In A Genre I'm Not Known For

First of all, comedy is still comedy. That I usually write it in another genre doesn't mean my style has changed. Secondly and bluntly, I needed the emotional release writing these stories provided me with. I wrote the series for myself, my mom, and my daughters—they love it by the way!—because all 4 of us were changed by the 2016 election... and not in a good way.

I think this series provides an emotional release through laughter that the average person in this country badly needs right now. Although I wrote it for those of us who are very much against everything Trump is and stands for, I hope those who disagree still read this if for no other reason than to get an understanding of where we're coming from... and hopefully develop some empathy that—currently—is lacking at best and nonexistent at worst.

Here's to laughter. It's still the best medicine ✌ 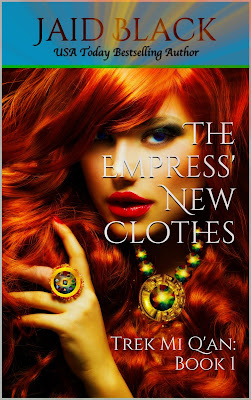 This has been a tedious and time-consuming process and I thank you for bearing with me. I haven't had time as of late to answer reader email, but I have read them. I will answer questions as soon as I can. Thanks! ~ Tina/Jaid
Posted by Tina at 1:39 AM 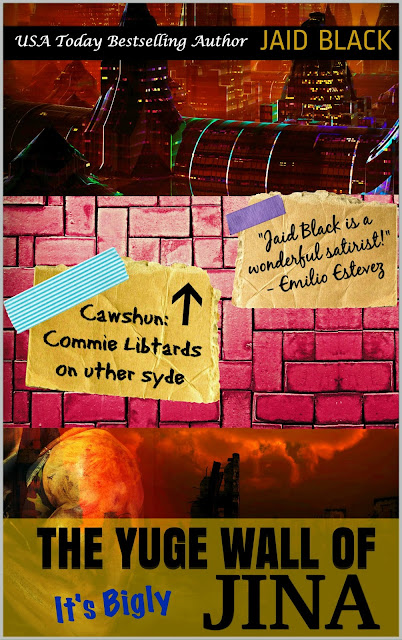 My next book is coming out in April! You can read the synopsis over at my website 💃
Posted by Tina at 9:54 PM