I just read the various online synopses and viewed the trailer for Killers Anonymous. Bluntly speaking? I feel sick to my stomach. RS Stansbury—my (sometimes) screenwriting partner—and I were robbed by Lionsgate. KA is a little too similar for comfort to our screenplay SKA or SERIAL KILLERS ANONYMOUS. The synopsis at IMDb even uses me and my writing partner's "circle of trust" in its description. The distrust between the killers, the dark humor, the Russian, the political assassination... it's all from my writing partner and me.

To the Writers Guild of America: WTF good does it do to register the copyright of a screenplay through your organization if you don't protect it?? I didn't upload SKA to you for it to be stolen at worst or borrowed heavily from at best; I uploaded it to you because that's what writers are supposed to do so agents and producers can view it and BUY IT if they like it. If CAA was involved in this in any way, shape, or form... oh hell no! Their top agent, Kevin Huvane, was hand-delivered a copy of SKA at his home in West Hollywood in 2015 by a longtime mutual friend.

I need what I most dread dealing with: a damn good LA lawyer.

Sherrilyn Kenyon, Game of Thrones, and a Health Update

I just heard about Sherri Kenyon's contempt of court charge...

We seriously need a new justice system that actually offers—call me crazy here, but—JUSTICE?! I've known Sherri for years and years; the judge should be (but won't be) ashamed of himself.

Apparently Sherri got "too emotional" in court so the judge threw her in jail for 10 days. I know firsthand how it feels to be demonized and lied about by the opposing side in a lawsuit—and how psychologically devastating it is when you aren't allowed to defend yourself against those sick lies—but to have that happen at the hands of lawyers representing your former spouse who allegedly tried to poison you? I cannot begin to imagine the level of warranted emotionalism Sherri was experiencing that day.

Point blank: our judicial system is setup to work for lawyers and only for lawyers. They get away with lying to the courts in the name of a vigorous (if untrue) defense. It happens every single day, multiple times a day, in courtrooms across America. Whether the lawsuit is minor or major doesn't matter; when the stakes grow higher the lies just become more obscene. Lawyers need to be held criminally accountable because as things stand they have every incentive to lie and zero incentive to defend their client as vigorously as possible within the confines of truth.

We are sold the belief that the purpose of the judicial system is to get to the truth; that fairytale is perhaps the biggest lie of them all. 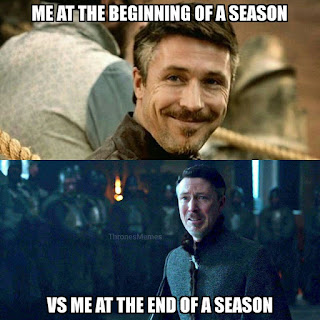 It's difficult to find justice anywhere these days—including in our fiction. In a few words, what the fuck was going through the minds of the Game of Thrones' writers when they decided "oh yeah... THIS is how we're ending the series..."?!

A girl knows she's not alone in her anger when people are still going on about the series' finale this long after the fact! For the life of me, I simply cannot fathom how the GOT writers thought their rushed and nonsensical ending would be deemed acceptable to a majority of viewers.

This isn't about favorite characters dying—we're used to that. This is about lazy writing that ultimately doesn't hold up.

I could go on, but you get the point. HBO fucked its viewers over bigtime with its piss poor series finale. I could have accepted a lot of outcomes as legitimate if unsatisfying, but this? It amounted to pure laziness combined with the "aha gotchya!" factor. If you haven't yet seen GOT, I highly recommend not bothering. It's not a series I could watch again knowing how lame it ends.

And lastly, a personal update...

I'm still quite ill, but at least now I'm ill and hopeful. I finally—after two long years of suffering through indescribable pain—won my disability case. In essence that means I can now receive the medical treatment and supplies I need to get better. (And I do very much want to get better!) More than anything, I pray I'll be able to write again. When you're in constant physical and mental pain it's impossible to concentrate on anything outside of it. My characters are still with me; they still want their stories told. Here's hoping I get to the point where I can give them the attention and focus they deserve.